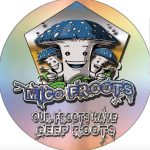 The Ghost psilocybe cubensis mushroom strain is one of a kind isolate, and it’s now a hot topic in the mycology community. If you’ve ever heard of this specific though rare psilocybe cubensis mushroom isolate, you’re probably aware of its intense potency. This special variety produces petite and thick fruit bodies with fairly low yields, but that’s not exactly what this strain is known for. The fact that this strain’s potency is said to be the greatest in the world is what makes it renowned in the mycology community. For those that want to add something very special to their research collection, the Ghost is an absolutely must-have. Jik Fibs is credited with developing the Ghost isolate from the TAT genetics. True Albino Teacher, often known as TAT, is a phenotype descended from the Golden Teacher strain’s genetic isolation. It’s a slow-growing mushroom that doesn’t yield as many huge mushrooms as other types. The Ghost isolate is also known for having a wide range of growing properties. This variety’s crowns are normally pure white, although some have a yellow tint to them. Ghost mushrooms resemble True Albino Teacher mushrooms in appearance. Although most have thick and fat stems, their stem and body sizes can vary greatly. They will display vibrate blue hues when bruised. The Ghost’s cap corners can also take on a wavy, gray look, akin to that of a bottle cap.